Roseworthy is approximately 101 square kilometres in size and is 46km from the Adelaide CBD. 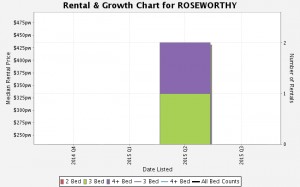 Roseworthy has a large grain storage facility consisting of both storage silos and bunkers for grain grown in the surrounding areas, and grain is now taken by road transport to Port Adelaide for export where it was once taken by rail. Roseworthy is the junction of the former Peterborough (now only to Burra) and Morgan (now only to Kapunda) broad gauge railway lines.

The Roseworthy campus of the University of Adelaide, including the Murray Institute of TAFE, is west of the town. It is well known for training winemakers, but also teaches other agricultural science subjects.

For more information on properties in Roseworthy call (08) 8522 4711 and speak to a local market leading agent with the Ray White know how.