Kapunda is approximately 200 square kilometres in size and is 73km from the Adelaide CBD. 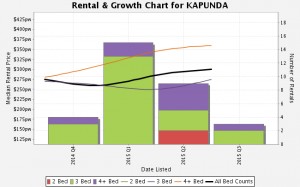 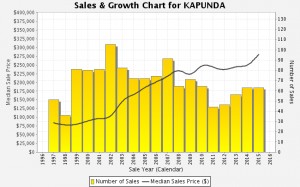 Francis Dutton and Charles Bagot, who both ran sheep in the area, discovered copper ore outcrops in 1842. They purchased 80 acres (32 ha) around the outcrop, beginning mining early in 1844 after good assay results. Mining began with the removal of surface ore and had progressed to underground mining by the end of the year.

Kapunda is famous as the home of Sir Sidney Kidman. He was a major cattle pastoralist who at one time owned 68 properties with a total area larger than the British Isles. He held annual horse sales at Kapunda with up to 3,000 horses sold during the week. His house, Eringa, was donated to the Education Department, and is still used as the administration building for Kapunda High School. The town also has the unfortunate honour of being titled the most haunted town in Australia after a television documentary focused on the town. Most locals were not amused, however it has led to an increase in the amount of tourists that visit the area. Due to this, the ruins of the Reformatory, located outside the town, were bulldozed, although some locals still believe in the ghost stories popular in town. The town is also close to the historical Anlaby Station and the manor, houses, gardens and other buildings on the property, many of which are being restored by its current owners.

Copper was discovered at Kapunda in 1842 and was mined from there until 1879. There are also quarries near the town which provide fine marble ranging from dark blue to white. Marble from the Kapunda quarries was used to face Parliament House in Adelaide.

Kapunda was home to several notable manufacturers of farm and mining machinery: Robert Cameron, Joseph Mellors, James Rowe and Adamson Brothers.[4] It was with this last-named company that T. J. Richards, the founder of one of Australia’s largest coach-building firms, started his career.

Today, Kapunda is a producer of cereal crops, mainly wheat, barley and oats. Value-added services carried out by local industry include stock feed milling and hay processing. Kapunda is a contributor to the wine-growing industry centred in the nearby Barossa Valley.

Kapunda has hosted the Kapunda Celtic Music Festival since 1976.

For more information on properties in Kapunda call (08) 8522 4711 and speak to a local market leading agent with the Ray White know how.